Originally posted on January 29th, I am sharing this story with the ‘Yeah Write‘ community today.

On Tuesday January 24th, I posted two pictures for my Project 366. Included with the pictures was a brief explanation of why the boys now shared one room, with a kid-given promise of a clean toy room on Friday January 27th.

Today, I give you an update on the promise and the playroom.

The day of the big move, Joe headed to the calendar and wrote down the day and time he and Charlie were to pick up the playroom. 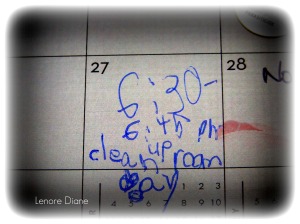 Realizing the sheer size of their task, I encouraged them to start on the project early. Alas, Joe always referred me to the calendar and the day and time set aside for the project.

Looking at the room on Thursday, I wondered how such a disaster could become neat and tidy, when boys are left in control.

Come to fine out, I needn’t worry.

Out of their room shortly after 6am on Friday morning, I heard the boys rummaging around the playroom. I listened to muffled discussions taking place about what goes where and who does what. I sat in bed listening, smiling and writing out a blog post in my head.

“I cannot wait to show Stasha the cleaned room.” I thought to myself. Stasha tweeted me on Thursday to check on the status of the room, and I quickly tweeted back that it was not yet Friday.

Joe, our newly turned 7ry old, tends to take the lead role when it comes to teamwork with his brother, Charlie, an over halfway to 6yr old 5yr old.

At the risk of stereotyping, Joe is a typical project manager in the sense that he stands and barks orders, while the minions do the work. When the minions refuse, Joe will remove himself from the situation, claiming he did all he could but it was of no use, because his minions were not up to the task.

Even though I heard Joe walk off the job, the two had spent at least 15 minutes working on the room without interruption.  I did not expect to find a perfectly cleaned playroom, but I did expect to find proof of progress.

Before I peeked in the playroom, my husband greeted me with news. “When I talked to my Mom last night, she invited the boys to spend the night at their house tonight.”

Hmmm…. We had no plans for the weekend, but if the boys went to their grandparent’s house, Rob and I could go on a date. I kind of liked the sound of that idea.

Then I peeked into the playroom and found this:

Based on the calendar, Joe and Charlie were to work on the playroom that night – from 6:30 until 6:45. As a parent, it is important for me to hold the children to task. Life is full of tasks needing our attention, and many times the tasks are dreadful and tedious; but, free time and play time increases the sooner we learn to quickly tackle tedious tasks. The boys needed to learn this lesson.

“Hey Boys, Have fun with Grandma and Grandpa!”

I’ll teach them the lesson another day. (Thank goodness for grandparents and doors.)

50 thoughts on “A lesson learned or a door closed”