The sun is up, its rays starting to slip through the blinds, gently lightening the room. The smell of fresh brewed coffee fills the air, mixing with the morning conversations. She is surrounded by friends, yet she feels alone.

True, there is a history of drama prior to trips. The packing, the cleaning, the caring for the kids creates tension within her. She tries to keep it inside, but more often than not – the tension breaks out, spewing anger everywhere.

The spewing started before the car was pulled out of the driveway. Tried though she did to be stronger than the frustration, the frustration won. And, as they joined others on the road, the Friday rush hour traffic fueled her frustration. 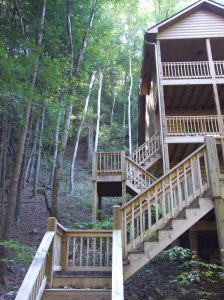 She visualized the cabin, knowing they would make it to their destination. She hoped the visualization would ease the tension within her, while simultaneously easing the tension in the car. Pictures of  the cabin, the creek, and the overlook  filled her mind. Inch by inch, she knew they were getting closer to their weekend escape with friends. Still, the tension gripped her like a vise.

Because the kids were staying with her Mom, their journey started by driving in the opposite direction of the cabin, making the long journey longer. Pulling out of her Mom’s driveway, she felt a sense of relief, as the bickering siblings were now happily staying with their Grammy. Perhaps, she thought, the bickering would end for her, too.

Though the bickering siblings were no longer in the car, the bickering adults were front and center. The two hours of car time that remained was filled with misery, misread directions and plain stubbornness. She hit the road with her family at 2:15 in the afternoon, and she finally reached the destination just before 7:00 at night.

Their friends came out of the cabin smiling, clearly pleased to see her and her husband were safe.

“We were getting nervous!” One friend yelled. “Glad you guys could make it.”

She tried to ease the air of tension that escaped with the opening of the car door by saying, “That was a very long car ride. I think we divorced each other by the 2nd hour.”

The night was spent gathered around the table, laughing and eating chili. Later, the group moved down to the creek, where they built a campfire, drank beer and made s’mores, that is everyone in the group but her. She sat alone in the cabin, sad she was on the receiving end of her spouse’s cold shoulder.

When she woke, she noticed he was in bed with her. Yet, even as he lay next to her, she knew he was so far away.

“Are you still upset, angry, mad or anything along those lines?” She asks.

“Why?” She asked, trying to ignore the knot in her stomach.

The two spoke to each other; she questioned what the point was in holding on to anger, and he simply insisted he was not ready to let go.

Tears welled up in her eyes. She gets up from bed, walks to the bathroom and cries.

Looking at herself in the mirror, she tries to find answers. She prefers yelling, and she prefers being yelled at. If someone is yelling at you, she thinks to herself, they see you, but when someone is ignoring you and giving you the silent treatment, it is as if you do not exist; you are invisible. Throughout her life, all she wanted was to be seen. She wanted to exist. And she knows she exists, if only because her kids call out to her countless times a day.

She showers, hoping the water wipes her tears and the soap cleans off her sadness. Still, she feels sad, alone and invisible.

Walking into the living room, surrounded by her friends, she sits, sips her coffee, and lets the caffeine boost her spirits. She listens to the conversations filling the room. The other couples laughing about their pre-trip plans and lists. She feels herself become sad again, wanting desperately to talk about how her spouse is ignoring her for doing the exact same thing they describe as they laugh about it.

Her husband is in the kitchen preparing breakfast. She wonders if he hears the dialogue, if he is listening to their stories of cleaning house, packing and time constraints. If he is hearing how each couple grumbled with each other prior to getting on the road. She stays out of the conversation, though she can relate to the words they speak. Feeling alone in a room full of friends, she finds herself holding back more tears.

“Breakfast is ready.” Her spouse announces. And the group gathers in the kitchen to partake in the bounty prepared for them. She remains seated, hesitant to join the group in the kitchen. She did not want to go to the kitchen and stand so close to her spouse while he ignored her. The stark difference between the closeness of the other couples and the distance between the two of them was too much for her.

Once the gang were seated at the table, she got up and prepared her plate. She noticed her spouse walk into the kitchen. Without a word, he reached out and hugged her. Suddenly, she was seen. She existed, and the sun’s light fully filled the room.

34 thoughts on “Alone in a conversation of silence”