“Do you remember, when we met? That’s the day, I knew you were my pet. I wanna tell you how much I love you.” So begins the song Sea of Love, written by Phil Phillips.

The song is on my mind for two reasons. First, Val Erde created a beautiful graphic painting titled, “Sea Love“, and she is sharing it with her readers. Second, today my husband and I are celebrating our 9th wedding anniversary. Between the Sea Love painting and the Sea of Love song, I am in a wonderful place.

This time last year, I told the story of how Rob and I met. The Long Awaited Approach is one of my highest rated posts, though the number of readers I had a year ago was significantly less than the number of readers I have today. I hope you will take a minute (or two) to read that post. As much as Rob has put up with me over the years, I want the world to know I am grateful for him.

Rob and I are different in many ways. For instance, he is very attractive and tall (he is 6’7″). When he walks into the room, you either notice him because of his looks or because of his height. Me? Well, I’m 5’9″, but I have a very forgettable face. (At least, you hope you forget it.) I’m kidding. I don’t think that low of myself. Still, I am a plain Jane, and Rob is a stud.

Recently, I was talking with two girl friends, and I said, “Rob is hot. That is a fact. And, I see women look at him and look at me, and I know they are thinking, ‘She’s ugly. How did she get him?’” One of my girl friends snorted in response to what I said. I laughed and said, “It’s true!” She didn’t say anything, but I knew she agreed with me. Well, I knew she agreed with the fact that I am definitely rated lower on the ‘Good Looks’ scale when compared to Rob. Rest assured, I have no intentions of trying to be anything more than a plain Jane. Long live plainness! 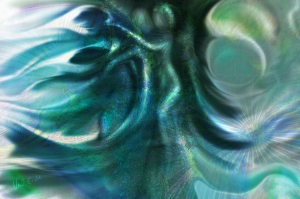 On Sundays, when I actually attend church, I’m always entertained at the number of women who will say, “Good morning, Rob.” Meanwhile, as I walk beside him, I simply get a smile. I suppose I should be thankful for the smile, eh? Before you take what I said to mean the women are after Rob, let me add that the guys do the exact same thing.

Rob is very approachable and friendly. And me? Yes, well, I am about as approachable as a rabid dog (minus the foaming of the mouth, of course).

During Sunday School (for adults), I mentioned how Rob was the social one in the family. One of our friends in the class smiled and said, “You’re kidding, right?” Rob even laughed and said, “Yeah. I’m real social.”

As I wrote in The Long Awaited Approach, I waited a very long time for Rob to approach me. When he did approach me, I was thrilled. Apparently, he thought I was all that and a bag of chips, so he asked me to marry him.

Today I dedicate Val’s ‘Sea Love’ and the song ‘Sea of Love’ to my better half, Rob. I like Robert Plant’s version of the song, though the man in the bikini is a bit distracting – and not necessarily in a good way.

Happy anniversary, Rob. I know you won’t read this, and I know you prefer I not write about you. But honestly, Dear, I want the world to know how much I love you. You put up with so much … like a wife writing about you, even though you prefer she didn’t.

26 thoughts on “Plain Jane Gets the Stud”

What you read is pure Lenore. I write from the heart and off the cuff. Having entertained my friends for years with my crazy thoughts and behaviors, I decided to broaden my audience. I hope you enjoy the show, which is my reality.
Loading Comments...
Comment
×
%d bloggers like this: