I am not trying to be mean, though sometimes honesty brings with it mean undertones. So, I apologize for any negative undertones one may feel by my declaration of having the best blogging buddies. Did I say that already? I don’t have cable, either. (Did you know that, Kim, the G is silent?)

Yes, my plan was to talk about my blogging buddies. Alas, all good plans are subject to change. Especially when the plan was crafted by a woman. (d’oh!)

See, this morning I needed to drop my youngest off at school – another day of kindergarten orientation. We live 15 miles from the school, and orientation is from 9am until 11am. Rather than drive an extra 30 miles, I decided to take advantage of free wifi offered at a coffeehouse located near the school.

Before we left the house, I packed my laptop, and I snagged my camera. I thought I would spend the two hours at the coffeehouse writing a post about the best blogging buddies – ever. I brought my camera, so I could take a few pictures from my remote location and include the pictures in my blog.

In the early days of my blog, I grabbed most of my photos from various websites. However, for the past year or so – I’ve made a deliberate attempt to use photos taken by me or someone I know.

Since my post was about buddies (best ever), I thought pictures of a coffee place would fit in nicely with the theme. Raise your hand if you have met a friend or two for coffee.

See? All of you have your hand raise.

Well, Young American doesn’t have her hand raised, because she is busy fighting off a boy wielding a stick with a spearhead made out of duct tape. (It’s okay, Young American, I know you’ve met a friend or two for coffee, and you’d raise your hand if you could. Oh, and I’ll send help.)

Now, for the record, I do not own a smart phone. (Which may explain the stupidity of my phone.) Still, my dinosaur of a cell phone does take pictures. Of course, the pictures are worse than a Polaroid Instamatic camera; plus, getting the lackluster images off my phone is as complicated as trying to tie your shoe while walking up the stairs, holding your cell phone to your ear and whistling “Skinny Marinky Dinky Dink”.

This is why, when I take pictures, I use my Fuji FinePix camera. No, my camera does not fit in my pocket. No, my camera is not discrete. No, those two facts do not bother me. I like my camera.

When I arrived at the coffeehouse, I ordered a grande black coffee (with no cream, no syrups, no whipped cream, no sugar, no steam, no half this half that, no light this light that, no yadda, yadda, yadda) and a slice of banana walnut bread. I sat down at a little round table, set up my laptop and waited for my coffee to cool down to a non-scalding temperature. 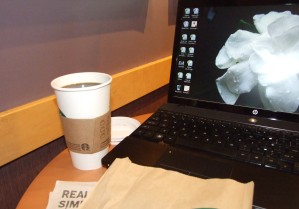 While waiting, I opened my camera bag and started snapping pictures of my little round table and laptop computer. I did not take a picture of the Moms gathered in the corner, talking about their latest shopping trip. Nor did I take pictures of the two businessmen on either side of the coffeehouse, busily typing away on their laptops, while simultaneously talking on their cell phone. In fact, I didn’t even take a picture of the two teenage girls at the counter ordering some sort of beverage with so many specifics, I was impressed they both received what they ordered exactly as they ordered it.

I disregarded the first two or three shouts, because I assumed he was talking to someone who had recently placed an order. But, by the fourth of fifth “Excuse me, Miss?!” I had to look up and find out which hard-of-hearing idiot was the the subject of the guy’s shouts. As I looked up, I noticed the man was looking at me.

(Would you like a slice of humble pie? A slice? No thanks; I’ll take the whole pie.)

Suddenly, the coffeehouse was quiet. Really quiet. The Moms in the corner halted their discussion of shopping. The businessmen stopped tapping on their laptop computers and paused their phone conversations. The customers at the counter waited in silence.

“Miss, I’m sorry, but we do not allow cameras in here.”

I smile politely. Okay, it was more of a Cheshire Cat kind of smile. But, I smiled. And, I quietly turned my camera off and replaced the lens cover.

I’m not one to Tweet or  update my Facebook instantly, with every rant or gripe that pops into my head. I find myself becoming dizzy, as I see/read the countless gripes of others who feel the need to blurt out everything negative. Still, in this age of instant – this age of social media – one must be careful how they go about interacting with others. Experiences, opinions, etc. can go from unknown to viral in minutes.

Embarrassed and a bit irked by the reprimand, I wanted to lash out. I wanted to fire off on Twitter and Facebook. But honestly, what would that do except let frustration grow to the point of ruining a pleasant morning?

In any case… I understand. Cameras are allowed, even the non-smart phone variety type, but picture taking is limited.

I’m returning to the coffeehouse tomorrow. Hopefully, I’ll get the post written about my bestest blogging buddies. And though I am tempted to take the camera with me, I will leave it at home. I’d hate to embarrass the guy by telling him he is ‘wrong’, should he pull another, “Excuse me, Miss?!”

25 thoughts on “The following statement changed everything: No cameras allowed”