We gathered at my brother’s house this past weekend. We were celebrating the high school graduation of my brother’s daughter. All my siblings came to the celebration, so the house was full.

At one point, everyone got together while my niece opened her cards and presents from the countless well-wishers. After the 50th (or was it the 50th gabillion) card, the peanut gallery became slap happy. Facial expressions, rolling eyes and hand signals were used when the lengthier cards were read aloud.

During the reading of one lengthy card, I made the comment in jest, “This person just likes the sound of their own writing.” Immediately, one of my brother’s in-law turned to me and said, “Did you just say that?! I can’t believe YOU just said that.” I heard my brother chime in with the same sentiment as my brother-in-law, while the rest of the peanut gallery was overcome with laughter.

Smiling, I nodded in agreement. They got me. It is true. I do like the sound of my own writing. And, I am thankful for the fact that social media exists and enables me to get all my silliness out to the masses in an instant. Even if others are rolling their eyes, moving their hand like a mouthy hand-puppet or faking a yawn to indicate my babble has bored them, I will keep on babbling.

But, and this is important, my babbles are not mean spirited. And, I am not trying to be all ‘holier than thou’. I prefer to use my babbling skills for good and not for evil. Seems social media makes it all too easy for users to spew hatred and point fingers where fingers need not point.

While I have no intention of turning this into a political babble fest, I like the sound of my writing enough to want to say the tragedy in Tuscon, AZ is a tragedy in and of itself. No one needs to spin it into something it isn’t, because when the sun sets, the babbling doesn’t change the lives that were injured or lost, nor does it ease the pain of the families directly affected. 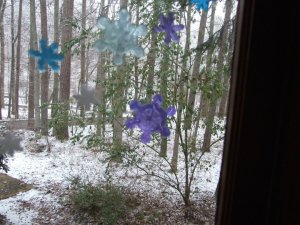 Right now, the state of Georgia is battling a Winter storm. Prior to the storm hitting, I went to the gas station to fill up my nearly empty tank. I was surprised to find several cars with drivers wanting to fill up their tanks, too. Drivers were trying to get their cars lined up in an organized fashion, waiting for the next available gas pump, but due to the number of cars – it was not an easy task.

I waited in line, as the driver in front of me filled up his car. While I was waiting, I noticed a driver in a corvette trying to get through the maze of cars. He honked. He went through some of the cars. He honked again, and this time he honked for a long time.

I noticed a driver in a SUV had backed up to let another car get through. Apparently, when the driver of the SUV backed up, he inadvertently blocked the corvette. Bad move. At least according the corvette driver.

The incident at the gas station was not politically, racially or religiously motivated. It was merely one man seemingly letting his anger and frustration get the best of him. Thankfully, the receiver remained calm and did not push back. I applaud the SUV driver for not pushing back. For many of us, the restraint used by the SUV driver is something we don’t have. We are quick to push back, quick to defend and quick to bring down – even when we are out of line or just plain wrong.

What you read is pure Lenore. I write from the heart and off the cuff. Having entertained my friends for years with my crazy thoughts and behaviors, I decided to broaden my audience. I hope you enjoy the show, which is my reality.
Loading Comments...
Comment
×
%d bloggers like this: