This morning, I posted the following thought on Facebook: “I think I am going to start blogging again. And with that mention – my stomach became filled with butterflies.”

Could this be a blogging comeback for me? Is it possible that I will dust off the cobwebs of my blog, open the curtains, and once again let the world read my words? Do I even have words worth reading?

These are all questions I am asking myself, because I miss writing. I could write and not “publish” my words; but what is the fun of writing, if the words you write are not read? And that question leads me to the real reason I stopped writing: reading.

So, will I write? Yes, I will write. Will I read and comment? Maybe.

Below is the letter I sent to friends and family for Christmas. Based on my Christmas letter, I’m not surprised I am back in the blogosphere.

This Christmas letter is the most fluid letter I’ve attempted to write. I cannot tell you the number of drafts I’ve generated, never fully satisfied with the “finished” product. At the last minute, I decided to share an additional picture with all of you, which changed the letter entirely.

This is not a Christmas letter but a story of sorts. Please excuse the length.

In February 2013, my Uncle D died. Uncle D is my Mom’s younger brother, and he battled Alzheimer’s for a number of years. We were thankful to spend the summer with him at the Shore in 2012. At the time, he didn’t really know me, but I knew him – and for the living, that’s what matters, and I made the most of it.

His memorial service was heart-wrenching and beautiful. The room was filled with laughter, tears, and love. My Mom’s family is a good group of people. I truly treasure time with the family. A piece of our puzzle is missing now, but we will work to keep the bond strong.

For the past 5 years, our Christmas tradition has included visiting (typically more than once) Santa and Mrs. Claus, who live approximately 5 miles from our house. And, for over 17 years from Thanksgiving until Christmas Eve, Santa and Mrs. Claus have opened their house to anyone and everyone. Their house is decorated to the hilt inside and outside. Mrs. Claus sits in the main house greeting everyone with a welcoming smile, while Santa sits outside the house in his own Santa shed.

From 6pm until 9pm daily, hundreds of families visit with Santa and Mrs. Claus. The line to visit with Santa is typically long and moves slowly, because Santa treats every visitor as if s/he is his only guest. He will spend as much time as the family or child needs, and he is always ready to smile for the camera – regardless of how many cameras are used.

Santa and Mrs. Claus are by no means fancy folk. Their house is a small two bedroom, one bath home, and it sits on a few acres of land, which is covered with a garden in the summer and lights in the winter. When you drive by their house during the off-season, you often catch a glimpse of Santa (always donning a red shirt) working in the garden. Based on their pantry, it is safe to assume Mrs. Claus spends her days canning the “fruits” of their gardens.  They are – like my family – good people.

This year, our trip to visit Santa was decided at the last minute, and we left our house later than usual. As a result, the line to visit with Santa was very long. When we entered Santa’s shed it was nearing 9pm. While still three families away from Santa’s big red chair, I noticed Mrs. Claus walk through the side door.

I was delighted! What a wonderful opportunity! We would get to sit with both Santa and Mrs. Claus. We’d already visited with Mrs. Claus and taken a picture with her, so this was a bonus! When I looked at my watch and saw it was after 9pm, I realized Mrs. Claus had “closed” the house and could join Santa.

Eventually, we made it up to Santa and Mrs. Claus, and we made the most of the time. I was glowing the rest of the night. In the 5yrs of visiting, we’d never timed it so perfectly. The moment was amazing. Even better – we were able to capture the moment with the perfect picture. When I got home, I posted the picture on Facebook, and I went on and on about how perfect it all was.

Well, we didn’t know the time with Santa and Mrs. Claus would be our last, but we sure made the most of it. We milked it for all it was worth. I am so glad we went – that day and that time. It was wonderful. It was perfect. The memory will be with me as long as my mind is with me.

Here’s to 2014. May the New Year be filled with the good stuff. And remember – milk it! 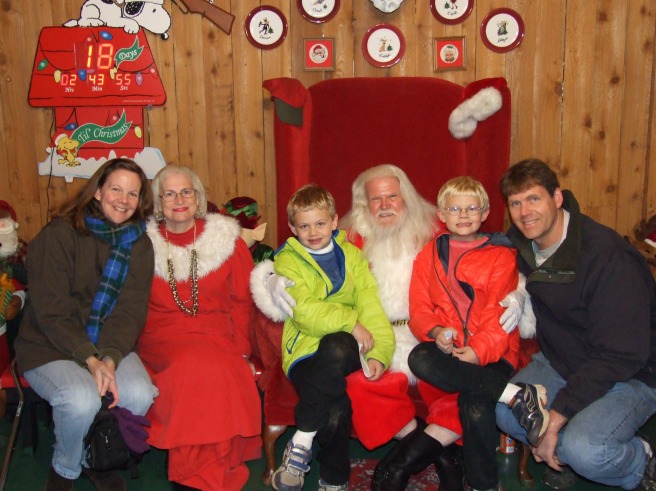 33 thoughts on “Could this be a comeback?”