You might be one of them, standing by the entry way to the grocery store with your youngin’ in tow, waiting for people to walk by you, hoping to make eye contact with the individual and ask the question, “Would you like to buy a box of Girl Scout Cookies?” Or maybe, you are the one that drives your son around the neighborhood, stopping at every house and walking with him to the door, as he does his best to sell popcorn for his Cub Scout troop.

I was never going to be that parent. Nope. If my kid was asked to raise money or sell something, I told myself I would make him do the work on his own. He needed to find out – through hard work and pavement pounding – what was involved in raising money, whether the money came from selling something or taking part in a sporting event. No Siree! I was not going to do my son’s work for him. It was his job. Not mine.

Of course, I also believed I would bring my newborns home from the hospital, and they would sleep through the night instantly. And, I never thought I would ever – EVER – count to three, when my kid did not do as I asked when I asked. Funny how things change. 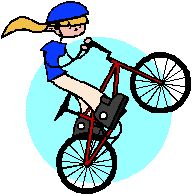 Today I sent out my first mass email to my family and close friends, soliciting donations for charities assisting with the crisis in Japan. Thankfully, this particular charity drive does not involve the selling of doughnuts, raffle tickets, chocolate bars, popcorn, wrapping paper or cookies. Instead, our first experience with helping Joe bring in donations is to find sponsors. We are looking for people willing to sponsor our 6yr old, as he rides his bike in circles this Friday, April 1, 2011, during a Trike and Bike-athon organized by his school. No, my blog-reading-friends, this is not an April Fool’s joke. Yes, my blog-reading-friends, he will wear a safety helmet, and his training wheels will be securely fastened to the bike (not the safety helmet).

Fear not! I am not asking you to sponsor our child. Although, if you were to sponsor Joe, I would send you a hand written thank you note, which would instantly be considered an antique in this day and age.

I am merely fessing up to the fact that I am doing for my kids what I said I would not do for my kids. While Joe is outside playing with his friends, I am networking with friends, reaching out to family and begging my bosses to fork over some money and sponsor my kid. Please forgive me for my previous thoughts regarding fundraisers, parents and the parents’ kids. I knew not what I thought, or something like that.

Seriously though, I will not stand in front of a grocery store selling stuff for my kids. Setting limits is good, right? I mean, we all have our limits, right? Maybe? *sigh*

In any case, with his helmet securely on his head, Joe will join his other classmates in the Trike and Bike-athon. For one hour (9am – 10am), Joe’s class will ride their bikes on a marked (round) track at the school. Pictures pending. Duh! If you are interested in sponsoring and/or supporting the kids at Joe’s school, they are raising money for two organizations actively assisting the people in Japan: Save the Children and the American Red Cross. Yes, I did just lower myself to the point of asking my blog-reading-friends. Please pass the egg.