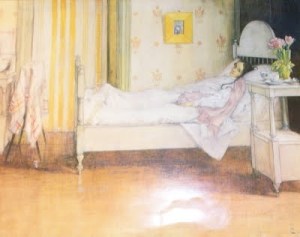 So, having spent the past 24hrs in bed and finding out I have the flu – I can see and hear my siblings gathering around the table offering up a pity party for me. “On the count of three, everyone. One. Two. Three. Aaaaaaaaw!”

Sick with the flu, cuz I skipped the shot
Fumbling with blankets cuz I’m cold – no hot.

Bored in my bed, little energy to spare –
Looking nowhere in a zombie-like stare.

Tomorrow will be more of the same –
And not being vaccinated is to blame.

:: The Great Outdoors – Inside
The house is a mess. A mess. I am behind on vacuuming, dusting and cleaning bathrooms. The dogs come in and out of the house so much, we have pine straw and sticks throughout the house. Sometimes, in an attempt to make it seem OK, I close my eyes and visualize a campsite. I tell myself we’ve simply brought the campsite indoors. S’mores anyone?

This morning, after Rob left to run an errand, I wobbled out to the kitchen to get some yogurt. As I passed by one of the bedrooms, I noticed the toys had been put away. I looked more closely at the floor  . . . he vacuumed! Rob vacuumed the entire house! I’m guessing he did it while I was at the doctor. In any case, we are back to living indoors! Good thing, too – I think it is suppose to rain.

:: Buzz, Buzz
With the all the respect in the world I want to tell you – Rob makes for one fine “House husband”. I am out-of-pocket two nights a week, which means Rob has to get the kids up and off to school two mornings a week. As a result, he’s had to adjust his work schedule. And now that I am sick, his task list has gotten longer. In addition to a larger task list, he is noticing some annoyances that I have complained about in the past.

I am literally staying separated from the family, in hopes they don’t get the flu. Last night, I was using the intercom on our phone and buzzing for Rob when I needed him. Later that night, he said, “Those intercoms are really annoying.” I had to laugh, because prior to yesterday, I hadn’t used the intercom – Rob had! He used it fairly frequently, and I hated it. He also buzzes me via a walk-talkie we have. Grates on my nerves! But, thanks to me being out-of-pocket, Rob has a greater appreciation for the annoying things in life!

.::.
Be kind, and take care of yourself and each other!