His tooth was loose for weeks, though no special attempts were made to pull it out prematurely. “It will come out when it is ready.” He heard his Mom and Dad say frequently. Still, he hadn’t expected the tooth to just ‘come out’. He had just put his finger on the tooth lightly, and he didn’t even wiggle it much. Suddenly, the little tooth was in his hand. Did he do something wrong?! He was new to this whole ‘losing a tooth’ thing. What was going to happen next? He wondered.

He walked into the kitchen. His parents looked at him and smiled. He wasn’t sure what to make of the experience, so he looked back at them with an expression of confusion and excitement. His younger brother came running to him, “Let me see! Let me see!” He rolled his eyes. ‘Younger brothers,’ he thought to himself. ‘They can be so annoying.’

“Don’t get so excited about it.” He said back to his parents. Couldn’t they tell he was a little confused with what just happened? Couldn’t they see that he wasn’t ready for a big deal yet? How did the tooth just fall out? Why didn’t it hurt? Why didn’t he feel it? That is what troubled him most. He was expecting pain. He was expecting something bigger. This was too easy. Surely, there was more to losing a tooth, right?

Before bed, his Mom asked him for his tooth. He watched as she placed it in a small bag. “Put this under your pillow for the Tooth Fairy.” She said.

“What is she going to bring me?” He asked.

“A lollipop.” He said with a big missing tooth grin.

“Well, I don’t know if the Tooth Fairy brings lollipops. You’ll have to wait until you wake up. I’m sure she’ll leave something, though.”

All ready for bed, he found himself more excited about what the Tooth Fairy might bring him. “How will she get the bag, if it is under my pillow and under my head?” He asked, as his Mom tucked him in bed.

He was going to try hard to stay awake. He wanted to meet this Tooth Fairy to make sure he was being given something good in exchange for his tooth. Unfortunately, he could feel himself falling asleep. He couldn’t hold on much longer …

Morning came, and he quickly moved his pillow to see if the little pouch was still there. It was! He quickly unzipped it. ‘Hmmmphf’ He thought with a frown. ‘That’s not a lollipop.’ He got out of bed and opened his  bedroom door. His Mom was standing right there, as if she was waiting for him.

“The Tooth Fairy just left me a note. I wanted a lollipop.” He said, as he walked away sad.

“Are you sure that is all that is in the pouch?” He heard his Mom ask. He didn’t listen. He wanted a lollipop, and he didn’t see one. He didn’t care if there was anything else in the pouch.

“I found a quarter.” His Mom said.

“I don’t want it.” He said, as his crossed his arms and huffed.

‘Stupid Tooth Fairy.’ He thought to himself. He didn’t care if she ever came back to his house.

“Well, I have to go to the store this morning. How about I buy you a lollipop?” His Mom asked.

He smiled. His Mom NEVER let him have lollipops. That is why he was hoping the Tooth Fairy would come through for him. “Really?!” He asked, hoping she wasn’t kidding.

“Yeah! Thanks, Mom!” He said, as he jumped up and down. ‘We don’t need no stinkin’ Tooth Fairy’ he said to himself.

“Let me take your picture, please.” His Mom said.

“No. I don’t want my picture taken.” He said. Though is Mom NEVER gave him lollipops, she was ALWAYS taking his picture. ALWAYS. Sometimes he thought about hiding her camera.

“Please?! I want to get a picture of your missing tooth.” She said again.

“Noooo!” He whined. He knew he was going to lose this battle, but he still wanted to fight it. 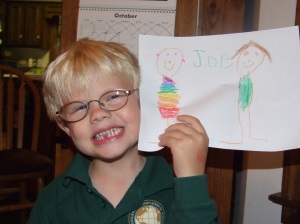 “I’ll give you two lollipops, if you let me take your picture.” His Mom said.

‘What?!’ He thought. ‘Is she serious? Man, I was going to let her win the battle eventually. I can’t believe she caved so quickly. Losing a tooth is a great thing! I can’t believe I am getting TWO lollipops.’

Feeling generous (and knowing he was getting two lollipops), he let her take TWO pictures. ‘Take THAT Tooth Fairy.’