We are lucky enough to live within 5 miles of Mr. and Mrs. Claus. Beginning on Thanksgiving, Santa and his wife open their house to the public every night thru Christmas Eve.

Santa begins the decorating process early in October, adding new decorations every year. We enjoy driving by their house in the fall, watching Santa prepare his grounds wearing his standard blue jeans and a red shirt. I don’t know that I’ve ever driven by Santa’s house and not seen him in a red shirt and jeans. END_OF_DOCUMENT_TOKEN_TO_BE_REPLACED 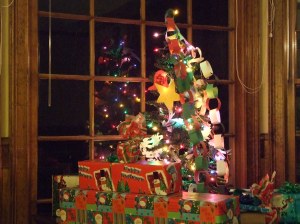 ‘Twas the night before Christmas, as I’m sure you knew –
The excitement is building, though the kids have the flu.
The tissues were piling up in the trash cans.
The fevers were making us rethink our plans.

The couch was filled with blankets and boys –
And, TV was preferred over playing with toys.
With plans on resting throughout the day –
In hopes the fevers would just go away.

The weather was changing, with a promise of snow.
And, were were home sick, with no place to go.
Still the presents were plenty, the Christmas spirit alive
We’ll make this a good one, without having to drive.

As the sun slowly sets, Santa hurries to fly –
While we wait to hear sleigh bells jingling in the sky.
So, hunker down now – and snuggle in tight –
Merry Christmas to all, and to all a good night! 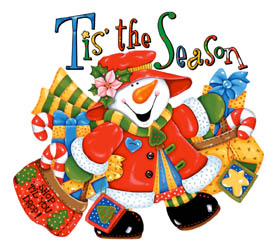 .:: Prep Time
Today, if you celebrated Thanksgiving yesterday, you may be suffering from a food or family hangover. As we loaded up our car and got ready for the drive to my sister’s house for Thanksgiving, I had to laugh at the grumbling and groaning taking place. So much hustle bustle in preparing for a family function can make for cranky kids and cranky spouses. Once everyone was in the car, I noticed a long period of silence. (Which is no small feat with two boys under the age of 6.) Apparently, we all needed a moment (or five) to decompress from the prep.

Once we reached my sister’s house an hour later, we were all smiles. Happy to be at our destination, we were ready to enjoy the Thanksgiving holiday. My smile grew wider when my brother arrived. My brother’s drive is shorter, just 5 minutes, which leaves little decompression time. And, based on the facial expression of my brother’s two boys, it seemed as though their family prep time also brought with it some grumbling, groaning and crankiness. Ah, the holidays!

Tonight, some of my siblings are heading to our house. We will enjoy dinner together, and then we’ll head out to visit Santa and Mrs. Claus. We’re all looking forward to it. Although, since folks are coming here – Rob, the boys and I won’t have decompression time after we tackle the family-visiting-prep. Uh-oh.

The holiday craziness has begun –
‘Tis the season for food, folks and fun.

Shopping, wrapping and baking, too –
The list is long – so much to do.

The family time makes life worth living.
So, enjoy the crazy and thanks keep giving.

Santa. Not everyone believes in Santa. Not everyone celebrates Christmas. But, many would say talking about Santa and Christmas now – before Thanksgiving- is way too early. Regardless of one’s belief or my timing, I think we can learn a great deal from the folklore of Santa. He, plumply, embodies giving, loving and caring.

Though Santa supposedly resides at the North Pole, I tell you – he lives in the state of Georgia. In fact, the merry, old elf lives less than 5 miles from our house. And, we get excited when we drive by his house during the ‘off season’ and find him working in his garden (always donning a red shirt). In October, after harvesting his garden, Santa begins transforming his home, inside and outside, into a Christmas wonderland. 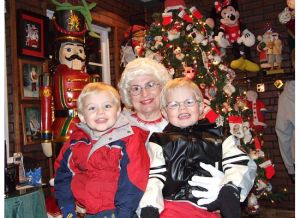 Santa and Mrs. Claus have opened their house to their neighbors every year for over 13 years. And by neighbors, I mean anyone who happens to drive by their house. We first heard about our neighborhood Santa at a Christmas party. We were told how this older couple, living off a road we rarely traveled, opened their home to everyone during the Christmas season. Initially, I thought the idea sounded odd. Opening your house to a bunch of strangers? Really? Then, in 2008, we decided to load up the kids and check out this jolly fellow and his wife, Mrs. Claus. Instantly, we were hooked.

This Friday, our family will officially start the 2010 Christmas season by heading to Santa’s house. And, we look forward to visiting him every Friday and Saturday night through Christmas Eve. (We may even go visit him on Sunday nights.) In addition, we will go out of our way to drive by Santa’s during the other nights of the week, just to get a glimpse of all the lights and decorations. 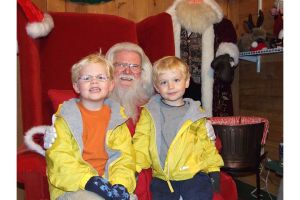 Having Santa and Mrs. Claus as neighbors gives our boys a different perspective on the man who travels house to house on Christmas Eve, delivering presents. Believing in Santa is easy for Joe and Charlie, in part because because they see where Santa lives, and they see him year-round. But the boys aren’t quite sure how Santa manages the gift giving thing in one night. Though really, neither Joe nor Charlie lose sleep wondering how Santa manages his workload. Nah. Joe and Charlie are too excited about visiting Santa; they don’t get bogged down with the details. Plus, Santa gives them a candy cane every time they visit. Every time! Man, that is the greatest thing ever. Just ask the boys.