This post was inspired by author Laurie Halse Anderson. I noticed a tweet she sent on Monday morning, and I decided to tell my own story. 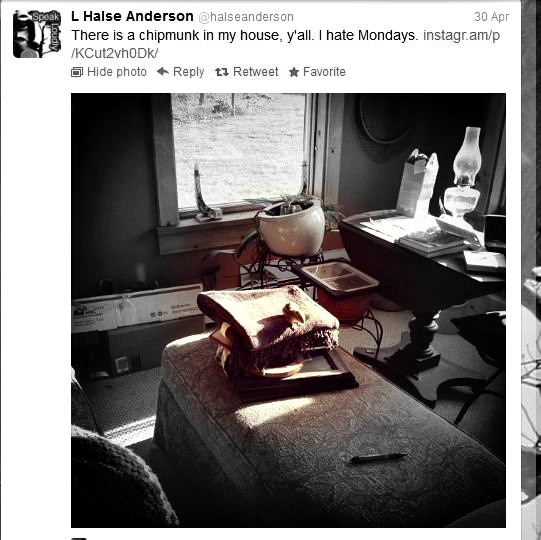 There I was – minding my own business, returning home after a long day at work. I walked upstairs from our drive-under garage/basement and noticed a squirrel on the carpet in the hall.

After freaking out a bit, I picked up the phone and called Rob at work. “Rob! There is a dead squirrel in the hall. The dogs brought in a squirrel and left it in the hall! What am I supposed to do?!”

Calmly Rob replied, “You can put something over it, and I will take it outside when I get home.”

I kept Rob on the phone with me, grabbed a towel, and returned to the furry carcass. Just as I was going to place the towel on the beast, it moved. Point of clarification, that sucker got up and ran down the hall and into the kitchen.

Let’s back up a bit, shall we?

Rob and I were married in October of 2002. We had three dogs and two full-time jobs. The jobs kept us out of the house from 6am until 6pm most week nights. Rather than return to messes on the floor, we left the doggie-door open, allowing our dogs free reign throughout the house and backyard. 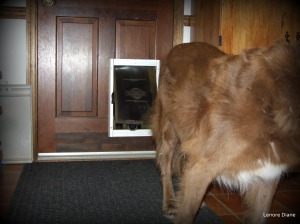 Who knew the dogs would consider the free reign was a welcome mat for displaying their kill.

My point? When we were home and not in our bedroom, we were living in the kitchen/dining room, and the living room was a wide open empty space. There were not too many places to hide.

The instant I hung up the phone with Rob, I opened the front and back doors. I chased the squirrel around the kitchen and living room, trying my best to get the rodent out of the house.

While in the kitchen, that squirrel found some sort of escape route underneath the cabinets. It disappeared into the woodwork. Gone.

I went down on my hands and knees, looking under the cabinets, trying to locate the hole the squirrel used. I couldn’t see one. I grabbed a flashlight and looked, but I could not see a hole for the squirrel.

When Rob got home from work, he asked about the squirrel, and I told him it disappeared. I showed him the corner section of the cabinets, and I explained that it went underneath and *poof* was gone. Rob mentioned something about gaps in the woodwork at the bottom of the cabinets where the corners are connected.

I waited the rest of the night for the squirrel to make an appearance. Then I wondered if it was going to die – stuck in the cabinet baseboards. Oh the odor!

Before I went to bed, I left out a small bowl of water and a few crumbs. I made sure the dogs slept with us, because I wanted to make sure the squirrel stayed safe. Truly, my goal was to get the sucker outside where it belonged.

The next day, the crumbs were gone, but the squirrel was nowhere in sight. Days passed, and we neither saw nor heard the squirrel. Rob was starting to wonder whether or not the squirrel even existed.

Late one night, while watching television (in the dining room) with my dog, Lina, I heard a noise. I looked to my left and I saw it. The squirrel was peeking around the corner of the counter/cabinets. It stepped out behind the counter long enough that I could see the thing was very skinny. I felt bad for the little guy.

Lina noticed the squirrel and headed right for it, but the squirrel made it to the mystery hole before Lina got to it.

As you might have expected, Rob was not home at the time. He saw nothing.

One night I returned home from work to find the squirrel in the living room. He was sitting by one of the windows. He looked so tiny and emaciated. I felt horrible.

I called Rob at work, and I let him know the squirrel was out running around again. I blocked off the kitchen, making every effort to keep the scrawny rodent in the living room. When I went to open the front door, I saw the squirrel run towards the kitchen.

Quickly, I opened the front door and darted to the kitchen, trying to scare him back into the living room. The squirrel turned around and ran up the brick fireplace.

From there, I was able to corner him enough to get him outside.

I got the squirrel outside!! The squirrel lived! We were spared the odor of a dead and decaying animal in our kitchen! Woo hoo!

And Rob? He never saw the thing. To this day, I talk about the squirrel that lived in our house for two weeks. Sadly, some hear the story more as work of fiction than fact, because Lina (the dog) and I were the only ones to witness the critter.

Remember readers, opossums aren’t the only critters that play dead, approach ‘dead’ animals with caution, and grab your camera. You never know when you might need proof the ‘dead’ animal exists.

This week I am hanging out with a bunch of bodacious bloggers. Click the badge to check ’em out.

48 thoughts on “Opossums aren’t the only ones that play dead.”