Chances are, if you turn on your radio on a Saturday or Sunday, a FM station will be playing nothing but 80s music. This was the case for me today, as I listened to my car radio while doing errands.

Growing up, I listened to the music my siblings played frequently, which included but was not limited to: Pink Floyd, Jethro Tull, Rush, Eric Clapton, Cat Stevens, James Taylor, Neil Diamond, and John Denver. Once my siblings moved out of the house, I found my own music, which included but was not limited to: John Denver, Huey Lewis, Journey, Prince, The Police, Squeeze and every single soundtrack created by John Hughes. 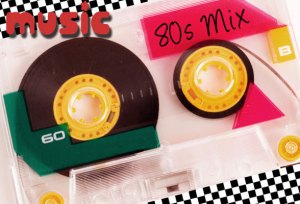 Quick aside: I remember the Summer I first heard Prince’s 1999. I was sitting in my Aunt’s cottage in Amherst Shore, Nova Scotia Canada. My cousin let me borrow his walkman cassette player and headphones. I sat on a mauve covered couch in their sun room, overlooking the bank and waterline. I pressed play and was startled. Suddenly someone was talking to me, telling me not to be afraid. He said he was not going to hurt me; he only wanted me to have some fun. I looked around, wondering who was speaking to me. Then I realized it was just the beginning of Prince’s 1999. Yes, I really am a dork.

As I was driving and listening to the ‘Big 80s Weekend’, I couldn’t help but find my beloved music a bit laughable. Jethro Tull, Rush and Pink Floyd – THAT was music. The heavily produced sounds of Information Society, Tiffany and Bananarama was – well, it was music, but the music was produced with layers upon layers of studio created sounds instead of a band of instruments. Please don’t misunderstand me, I love my 80s music today, as much as I loved it in the 80s. Furthermore, if you pass me on the road, while I am listening to 80s music, you will find me singing loudly and smiling widely. But, the 80s has nothing on the 70s, 60s and earlier.

Now, having said all of that, I’d like to share with you a sample of songs and videos I love today as much as I loved way back when…

This is one of my all time favorites. I love it! I dare you to try and NOT move your arms during this song. Oh, you know what I am talking about.

My first taste of good ol’ George Michael and Wham!

To those that went to elementary and high school with me, Curt Smith always reminded me of Matt Kern. And Roland? He reminds me of John Cryer. Of course, I didn’t go to school with John, but Duckie is a fond 80s memory.

And finally, Nena, whose keyboardist reminds me of the a guy from A-Ha, another great music and video maker of the 80s.

For all things 80s, check out: http://www.total80sremix.com/. I hope you have a nice weekend full of good music, regardless of the decade.