She could hear the rumble of thunder in the distance. Another summer thunderstorm was brewing, triggered by the hot and humid day. She snuggled herself closer, finding comfort in him. She smiled and nudged him, as he wrapped his arms around her.

“Are you ready for tonight?” She asked. “Oh, let’s not talk about tonight, right now.” He said, pulling her closer. “I was hoping we could just enjoy this moment.” She smiled. She was enjoying this moment, as well as the countless other moments of the weekend. She hated that they were heading back tonight. 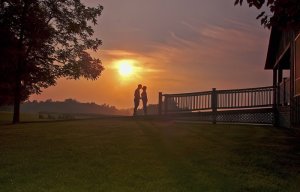 He surprised her on Thursday, walking into her office unannounced. “We’re leaving.” He said. Startled, she felt her face get warm as she blushed. She had met him only 3 months ago, and the chemistry between the two of them was intense. Lust? Certainly; still, the love was undeniable.

“Our flight leaves in two hours, giving us just enough time to get to the airport and board the plane.” He informed her. “But, what about work?” She asked. She didn’t care a thing about work, but she felt the need to question him a little. “Forget about work. I am taking you away so we can marvel at each other without interruption.” He said with a smile. She laughed. He was a true romantic, but it was his sense of humor she loved most. Well, she loved his hands, too.

Within 4hrs, they had reached a secluded cottage on the shoreline. She remembered how the cottage was set up when they walked in the door: candles, fresh fruit and wine.

The wind picked up, as the thunder grew louder. She stood up, and walked to the bay window, watching the storm approach. He walked over to her. “Maybe the storm will delay the flight.” He said, as he began to run his fingers through her hair. She loved how he played with her hair. “Mmm..” she said. “That would be just terrible.”

She felt a blaze across her dress, as he reached and turned her around to face him. He started kissing her neck, and she heard herself sigh. She placed her hands on his face and brought his soft lips to hers. His hands slid down her back, unzipping her dress.

“The flight.” She moaned. “We’ll catch another one.” He whispered. Her legs became weak, as he looked into her eyes and smiled.  Slowly, he brushed her dress off each shoulder causing it to fall to the floor. She closed her eyes as he started to caress her . . . “Mom! Joe just flushed my wubba nub down the toilet!” And, I’m back. Closing the book, I return to my life as a Mom.

One thought on “An Escape”