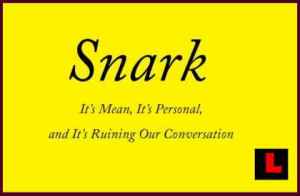 My word today is ‘Snarky’. According to Merriam-Webster, the definition of Snarky is as follows: 1 : crotchety, snappish 2 : sarcastic, impertinent, or irreverent in tone or manner <snarky lyrics>. Snarky is a fitting word for today, as I continue my PMS battle. No worries, this is not going to be a rant about PMS. Instead, I am writing about the word snarky, because it is a word I hear with growing frequency. I don’t consider myself to be a snarky person. However, I am known to be sarcastic. And to me, there is a distinct line between sarcasm and snark. Be warned, I’m probably going to come across as a little sensitive in this post.

With social networks like Facebook and Twitter, friendly chit-chat can to turn to disrespectful rudeness pretty quickly. The word ‘friend’ has changed with these social networks, too. One can have over 500 Facebook friends, but what kinds of people make up the over 500 friends? Are they real friends? Are they friends that you go to great lengths to stay in touch with through the years, or are they merely friends you are curious about every now and again? And, if you are snarky to these friends, do they take it as innocent and playful sarcasm? Or, do you they find it to be irreverent and rude? Frankly, do you even care how they take your comments? Truth be told, the real friends you have are the ones you interact with the most, whether it be via Twitter, Facebook, telephones, gatherings or email. And, you can check out anyone’s “Wall” on Facebook to determine which friends are real friends versus the ‘social network’ friends.

I admit, I’ve had my feelings hurt by snarky ‘friends’ on Facebook. I don’t know that they meant harm; instead, I think the distinct line of snark vs. sarcasm is blurred in the world of social networks. I cannot believe everything that is said or typed on Facebook would really be said out loud to people. It’s just not how the world works. In my opinion, the reason these social  networks became so successful was due, in part, to the fact that people could pretty much say whatever they wanted or felt with little to no filtering or backlash. Blogging is another example of how filters seem to evaporate, as folks spill there guts while offering their take of the world. And please, pardon me while I spill my guts, as I am an active participant of the named social networks.

As a participant in social networks, I am not trying to sound judgmental. In fact, I believe a great deal of good comes from social networks. However, I worry about our filters, and I worry that our filters – which serve a respectful purpose – are evaporating at an alarming rate. Much like the Ozone layer is becoming smaller and the greenhouse house gasses are (allegedly) overcoming our Earth, our filter of respectfulness is also becoming smaller. My nieces and nephews are not aware of a world where people only communicated by corded telephones. My younger relatives are not aware of a time when you actually put forth an effort to have conversations face to face vs. the corded phone. They don’t even recall a world where you actually played outside and had to pretend to be a good guy, shooting a bad guy with the coolest stick you could find. They do not know of a world before XBox, Nintendo, etc. This younger generation doesn’t know what it is like to be patient – deliberate – thoughtful. With social networks and electronic mail, everything is instant – reactive – not filtered. And, when one is responding in an instant and without a filter, snark is sure to show itself. Sarcasm is everywhere, and sarcasm is in your face. Sarcasm is in daily face to face conversations, on television, at home with the family and online with friends. But snark? Snark seems to lurk in world where you can hide and have a sense of anonymity or carelessness. Snark is mean. Snark is personal. And, in my opinion, snark is ruining our conversation, even if the conversation is virtual.

3 thoughts on “A bit snarky”