Yesterday, I wrote a post about things I said I would never do and ended up doing. Included in the list was the mention that I vowed never to get my kids video games. What I did not say was that I would never buy video games for me and Rob.

Pre-kids, Rob and I went to Wal-Mart and bought two cool little gadgets that hooked to the television and allowed us to travel back in time. We traveled to time when arcades were filled with games like Pong, Dig-dug, Adventure, Rally X, Breakout, etc.

Sometimes, on the weekends, the boys will play these games. How funny it is to watch our boys play Pong and love it. (Long live the classics!) END_OF_DOCUMENT_TOKEN_TO_BE_REPLACED

.:: Loop de loop
Once again, I am here to inform you that we are crazy. All the occupants within the Nacoochee Nest, which includes myself, my husband and our two boys, are crazy. The wackiness of this post will only affirm we are riding on the crazy train. In all seriousness, we have gone bonkers after having spent way too many days with each other and no one else. True, Joe had a brief stint at boarding school (aka Grandma’s house), but within seconds of getting in the car with his younger brother, the bickering began as if the two had never been apart from one another. And, within two seconds of entering the Nacoochee Nest, the two were – again – whining about each other regarding this or that.

The whining. Oh my. The whining. All four of us are whining. It is insane. Insane, I tell you. We are loopy. We are crazy. We are nutty. And, we are doing our best to find sanity by doing a veritable plethora of things. For instance …

Using the following quotes, which are being uttered while partaking in a specific activity, see if you can name the activity:
“Come on!” “You made me do that!” “Darn it!” “Please be quiet!” “Stop it!” “Don’t laugh at me!” “I need a kleenex!” (Wait, the kleenex quote is because of the colds running rampant through our house. My apologies.) “Yes!” “200!” “Did you see that?”

If you guessed “playing video games” you are correct. Joe and Charlie pulled out our ‘old school’ video games. The video games are contained in a little gadget you connect to the television; five games packed in one little hand-held device. The games included are: Dig Dug, Pac Man, Galaxian, Rally X and Bosconian.

Rob and I are laughing as we watch the boys take on the familiar poses we took on so many years ago. And, when Rob and I are at the helm of the joystick, Charlie asks “How come you know how to play this?” Rob laughs and says, “I used to get excited when I was babysitting and the kids went to bed.” I then add, “Yes, my friend Lindsey-loopner can tell you about my addiction to Ka-Boom! and Pitfall.” Of course, Rob and I are having the conversation with ourselves at this point, leaving Charlie looking confused.

Have I mentioned the whining? Yes, I believe I have. Lately, dinners have been a prime time for whining in our house. “What’s for supper?” It is a simple question; however, I know my answer to the simple question, at least when the vegetable is mentioned, will generate the following whined response, “I doon’t liiike [insert food here].”

So, last night, when the nightly question was asked by Charlie, I said, “Well, I’d tell you. But, you won’t like it, and I don’t want to hear you whine or cry.”

Wordless and whineless, he looks down, smiles and walks away. 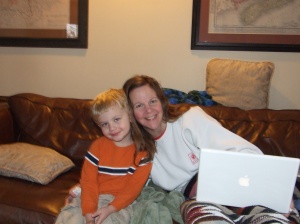 Yes, the past two weeks have been crazy at our house. As the sickness begins to lift, the humor is starting to stream in more readily. I am optimistic that we will be healthy by the new year. We’ll go into the new year as crazy as we are today, but our craziness adds to our character. And, we done got a ton of character!

Now, please say a prayer for my friend, Carol. I am meeting her for dinner tonight. This will be my first interaction with the outside world in weeks, and I’m twitching with excitement. God help her.