I stumbled out of bed around 7 a.m. this morning. Before I could make it out of the bedroom, Joe came running to me, wishing me a good morning. Then, he and I went and parked our butts on the couch and watched ‘Martha Speaks’ on PBS. Joe sat with me, drinking his soymilk, while I drank my coffee.

Rob greeted us with his coffee, and he quickly wished me a ‘Happy Mother’s Day’. Joe smiled, mumbling he forgot it was Mother’s day. Within five minutes, Charlie meandered out of his room and joined us on the couch. Then Joe sat up and said, “Give me one second, Mommy.” He stood up and walked to the TV cabinet, pulling something out from behind the cabinet. Then he came back to me, handing me an envelope. I opened the envelope, finding my Mother’s Day card from the boys.

While eating breakfast on Saturday, Joe mentioned he had something for me. He said he hid it in the living room, and I couldn’t go look for it. He also said he hid something in the kitchen/dinning room, and I had better not go looking for it, either. Blogary, I got such a kick out of the fact that Joe hid his presents for me. What a cute kid. And, might I add, I love things like that – hiding gifts, cards, etc. Oh, and Joe went to retrieve the gift he hid in the kitchen, too. It was some hardened play-doh he made into a face. Charlie quickly got up and went to his room, returning with three hardened play-doh creations. Blogary, I love my boys. And, I love Rob, who also gave me a nice Mother’s day card; though, Rob did not give me any hardened play-doh. *sigh* Maybe next year.

The boys and I spent the rest of the morning eating breakfast together and getting ready for church. Once again, I played hooky from church, staying home to clean house.

That’s right, Blogary. I spent this Mother’s Day cleaning house. And, let me tell you – this was one of the best Mother’s Day ever. I vacuumed, dusted, cleaned the bathrooms, changed the sheets on the beds, changed the towels in the bathrooms, rearranged the living room (Blogary, I love rearranging furniture) and did countless loads of laundry. Laundry. Gracious, I did loads (literally) of laundry. I started the first load around 8:45 a.m., and as I type I have a load of laundry still drying in the dryer. It is 7:35 p.m.

Around 4:30 p.m., after having enjoyed a long shower (Blogary, I shaved, too!), I sat down to watch a movie and enjoy some seriously good junk food. And now, I write to you, while Pandora plays in the background. I am waiting for the boys to return home. I am surprised they aren’t home yet – but I do expect them at any minute now.

Blogary, I’m not sure how other Moms spent their day. I suspect many Moms spent the day with their family. I don’t know what it says about me, when I had a super day – at home – alone – doing household chores. Still, I look forward to seeing my boys when they get home; and, I look forward to spending the rest of the night with Rob. And, when I go to bed tonight, I will say a prayer of thanks for the love in my life. I will give thanks for the fact that my boys let me enjoy Mother’s day the way I wanted to enjoy it. Here’s to all the Moms of the world. I hope you had a super day, too. ACK! I hear the garage door opening. The boys are home! Woo hoo! Gotta go!

P.S. Before Joe went to sleep, he said, “Mommy, I want to give you one more present for Mother’s Day.” Then he gave me an around-the-neck hug. Blogary, around-the-neck hugs are the BEST hugs. This is another addition to my list of thanks tonight.

“Mom?” I hear through the locked bathroom door. I am in the shower, so I can barely make out what is being said. “Guys. I am in the shower, and I can’t hear you. Can’t you wait until I am done?” I yell in return. Ignoring my plea, Joe shouts, “Do I have to wear underwear today?” And so begins another morning . . .

I watched The Middle this week, which is a comedy about a family of five. The episode surrounded Mother’s Day, and the Mom made the comment that Father’s Day is so successful because a Mom is in charge of it. Some Father’s don’t seem to grasp the concept of Mother’s Day, and/or they need the help of the Mom to pull it off successfully. That’s OK. Moms deserve to feel appreciated and loved more than one day a year, as do Dads. I must admit, the kids and Rob do a fine job of providing me with love and support. And, I don’t have a problem asking for a time-out when I need one. Sometimes, the guys even encourage it! (Go figure!)

So, it’s officially official. Joe was accepted into the Montessori school for Kindergarten. Rob and I met with the Director of the Montessori school this week. She reviewed Joe’s test and scores with us. And, she showed us a couple of projects he completed. In addition, she let us know how he responded to the following question:

“Joe, what is one thing you remember learning from Ms. Suzann [his day care provider]?” “Well,” Joe responds. “You should never say you don’t like God.”

Did I mention the Montessori school is a Christian school? Looks like Joe is getting a head start on the art of kissing up to the teacher. Good boy.

Not too long ago, the makers of the Baby Einstein videos were in the news. Apparently, parents were complaining because their kids weren’t becoming the geniuses the products claimed to create. Studies were done by – well, the folks that do studies. The conclusion was that kids who watched the videos did not speak or read any earlier than those that did not watch the videos.

Shocking, right? Kids do not become geniuses by watching videos. Who knew?

Though I make no claim that either Joe or Charlie are geniuses, I do claim that both Joe and Charlie know instruments because of Baby Einstein’s ‘Baby Meet the Orchestra’. We watched (and still watch) ‘Baby Meet the Orchestra’ frequently. Once, while driving in the car and listening to John Denver [hush], Joe said “Hey! I hear a French horn.” He was correct. And, to this day, both he and Charlie will request “the French horn song.” 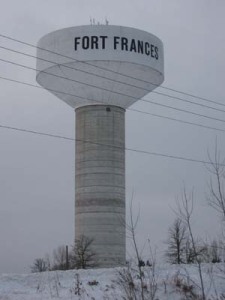 Earlier this week, we drove by two water towers, similar to the one pictured. Joe said, “Look! That looks like a timpani.”

Is Joe a genius? I doubt it. But, I assure you, we didn’t teach him about the sound of  French horn or the Timpani drum. His musical knowledge (and strong interest) comes from Baby Einstein.

Facebook is a funny social network. Really. We’ve all seen the skits mocking Facebook, where some ‘stranger’ comes to your front door, barges in your house, hugs you and goes on and on about the good ol’days. ‘Friend requests’ pop up left and right. Friend requests are ignored, and friend requests are accepted. Names are entered in the ‘Search’ box on the off chance one might find a ghost of his/her past.

Well, after several failed attempts at searches, I finally found a long lost friend by snooping through friends of my sister’s friend’s friends. Seriously, there are several qualities about Facebook that make it a stalking network. Hello. My name is Lenore Diane, and I am a stalker. I think I have admitted that fact in previous posts.

This friend and I were in a movie back in 1979. When the movie was released in the United States the name was The Visitor. But, as I have since found, the movie was a foreign film with the name Stridulum. It’s a cult classic. Sadly, it is unavailable on DVD. I suppose I should say, it would be a cult classic. Amazingly enough, I found a clip on YouTube, and it is the clip that includes shots of my friend and me. My friend is more visible than me, but I see me (brown dress, blond hair.) Curious? Here you go: http://www.youtube.com/watch?v=3mi6PMFJyBo

Here’s hoping everyone has a nice day, night, weekend, etc. I am going to cut out of work early, pop in a movie and eat some Ben & Jerry’s Phish Food. Sure, I could spend my time doing something useful and perhaps meaningful. But, I like to remember an old Steve Winwood song, “While you see a chance take it”. I suppose I could see this as a chance to clean the house or do work-work. Meh. I like the ice cream/movie option best. Cheers!

I checked the junk drawer this morning, in search of some magic beans. Sadly, I was unable to find magic beans. Looks like I’ll have to tackle the day using my own super hero abilities. Now, where did I put my super hero abilities? I’m finding it hard to locate anything in the house, these days. I’ve been an out of commission Mom the past couple of days. And, since my faithful assistant, Daddy Rob, reported for duty, things have gotten a little out of whack, so to speak. END_OF_DOCUMENT_TOKEN_TO_BE_REPLACED